Fans of the hit anime series Demon Slayer: Kimetsu no Yaiba are in for a treat as the show is set to return with Season 3 later this year. To prepare for the upcoming season, viewers can now catch up on the series via Netflix’s streaming service, which will be featuring Season 2 of the show starting January 21st.

The second season, which is based on the Entertainment District arc from Koyoharu Gotoge’s manga, was one of the most highly-anticipated releases of 2022 and received widespread acclaim from fans. Now, even more viewers will have the opportunity to watch the show on Netflix. However, it is unclear whether the streaming service will include the Mugen Train arc in addition to the Entertainment District arc.

Aside from that, both the TV anime seasons and feature film release of Demon Slayer are also available on Crunchyroll. As the third season is set to tackle the Swordsmith Village arc from the manga, it is crucial for fans to catch up on previous episodes before the new season premieres in April of 2023.

The upcoming season promises even more thrilling battles for the main character Tanjiro Kamado and his companions, making it a must-watch for fans of the series. 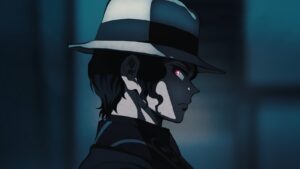